There are five major styles in archery, from target, field, 3D, traditional and bow-hunting. Here we take a brief look at each: 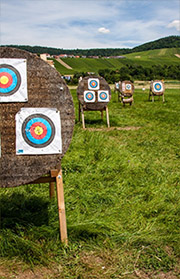 Target archers shoot at circular targets fixed at specific marked distances. Archers shoot on a level field with their feet or the wheels of their wheelchair on a stationary shooting line. Archers may use longbow, bare-bow, re-curve, and compound bows. At competition level, shooting is timed.

Indoor shooting in winter sees targets at a distance of 18 or 25 metres. The outdoor season sees adults compete at distances of up to 90 metres for men and 70 metres for women. World Archery define the rules for target archery, including difference distances for Junior classes and para-archers.

In the Olympics archers shoot with re-curve bows and compete at 70 meters. They aim at a target measuring 122 centimetres across. Archers also shoot in a fast-paced Team Round.

Field archery is where flat or three-dimensional targets are set at various marked or unmarked distances over rough terrain, often in a wooded area. Field archery helps an archer become more proficient in 3D and target archery.

In field archery, archers shoot from pegs set in the ground. These pegs are painted different colours for the distances appropriate to each division. The most common type of bow used in field archery is the compound bow, though re-curves and traditional bows are also used. All archers shoot arrows with field tips.

A subset of field archery, 3D archery is characterized by the use of life-size three-dimensional animal targets made from foam. The primary goal of shooting 3D is to improve skills as a hunter, but in recent years the discipline has attracted a growing number of competitive-minded archers who are solely interested in shooting good 3D scores.

3D target distances are usually unmarked, making the calculation of estimated distance one of the most challenging aspects of this type of archery. The targets have a set of scoring rings, with the higher points generally centred over areas such as the heart or lungs. As with field archery, broad-heads are not allowed for shooting at foam targets.

For those who want the challenge of shooting without a sight or other modern adaptations, traditional archery means shooting a longbow or re-curve without stabilisers, or other tuning equipment. Yet many traditional archers choose to shoot with carbon fibre arrows, or use a string made from durable synthetic materials. Some archers value historical accuracy and prefer bows and arrows crafted using traditional techniques, and natural materials. They may also choose leather and other natural products when choosing arm-guards, gloves, quivers, and 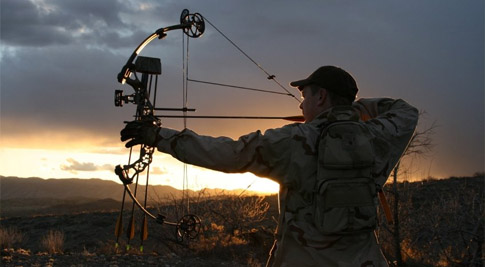 Bow-hunting is one of the most ancient methods of hunting and the oldest style of archery. Although many modern hunters may use state-of-the-art equipment, some also hunt with traditional bows and aiming methods.

Generally, bow-hunting requires a license and is only allowed during certain seasons. Check for licensing and restrictions in your area.