Archery is one of the oldest arts still practised today, with evidence of ancient archery found across the globe.

The earliest people known to have used bows and arrows were the ancient Egyptians, who adopted archery in approximately 2800 BC for purposes of hunting and warfare. The first composite bow was produced by the Egyptians, made from wood, tipped with animal horn and held together with animal sinew and glue. Unstrung, it resembled a "C" shape and would have required 2 people to string it. The bowstring was made from sheep intestines, also known as ‘catgut’. The Egyptians used very light arrows that could be shot 400 yards using the composite bow and would easily penetrate the armour worn at the time. In war, highly skilled archers would ride on the back of light chariots and to go around the side of a group of enemies during a battle and attack them from behind with devastating effect.

In China, archery dates back to the Shang dynasty between 1766-1027 BC, when a war chariot carried a three-man team: driver, lancer and archer. In the Far East, archers were still employed in warfare as recently as the nineteenth century. During the Zhou dynasty from 1027-256 BC sport archery tournaments took place at nobleman courts for entertainment.

The Chinese introduced archery to Japan in the sixth century. One of Japan’s martial arts, now known as kyudo (way of the bow) is practised primarily as a method of physical, moral, and spiritual development. After certain ritual movements, the archer moves to the shooting line and shoots from a distance of 28 meters at a target 36 cm in diameter.

Middle Eastern superiority in archery equipment and technique continued for centuries, allowing the Assyrians and Parthians to conquer much of Europe and Asia, and Turkish archers to push back the Crusaders. 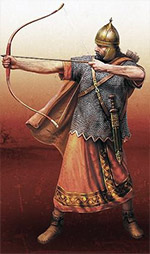 The Roman Empire owed much of their military superiority to their skilled archers. Yet by the sixteenth century, the bow and arrow were slowly displaced by firearms as a military weapon in Europe, and by century's end the bow had been almost abandoned as a weapon.

The first known organised competition in archery was held at Finsbury, England in 1583 and included 3,000 participants. One hundred years later archery was developed almost solely as a recreational and competitive sport in the Western world.